Questions, Answers and… the System In the year and a half of existence of this Blog page, I had received many emails from many different persons who had shared their appreciation, gratitude, love, help and, also, as it happens, disappointments, insults, threats, and psychic attacks from some “light workers” (at least they claimed to be so).
In many of these emails, there were many questions concerning where I had learned, studied, practiced, if I am a Gurdjieffian, a follower of the Advaita, Krishnamurti, Zen or Buddhist philosophy, which “school” or center I had attended, who is (or was) my teacher, if I am an enlightened, etc.
Of course, I can’t and I don’t wish to answer all those questions, mainly about myself, the teachers and where I had learned: in part because I consider that what is most important is not the pedigree or a certification, a personal story or any “curriculum vitae” which cannot describe or legitimatize an inner path. Indeed, how many people can claim to have been pupils of this or that great and enlightened guru or teacher, but still remain the same (if not worst) than before. Even if I don’t have anything to sell, I truly wish to make a distance from those who chose to reinforce their image through the enunciation of their study in schools or under the supervision of various teachers. A true and unselfish authority in life arises from the realization of the same. In the same way, the authority and efficiency of a teaching depends on its capacity to bring to an inner development its effectiveness which could be discovered and verified by the students who follow it.
The other reason of the choice to keep silent towards some things, is the wish of the fellows with whom I learned and the “teachers” who taught us to keep and maintain their privacy.
Ok, now it’s time to come to the point: many of the questions I received asked if there really exists a concrete system toward self development, if there is one better than another, and similar questions. Here, I would state that there is almost no teaching which is shared in the world that isn’t of value: the problem is that its efficiency depends on who shares this teaching and the dedication of those who follow it.
There is also a difference between a teaching and a system. Indeed, a system is something that doesn’t change from age to age, from place to place, while a teaching is susceptible to age, place and culture in which it’s shared. For example, Gurdjieff is claimed to have taught a system (or knowing) that remained unchanged through many eras, but he “translated” it to be understood by people of a determined period that belonged to a determined cultural environment- the Western.
A system could be likened to a map which is needed to develop an efficient teaching. This is not a metaphor nor a philosophical speculation: these maps exist, and they are almost every day in front of the eyes of practitioners, studios and thinkers in the field of spirituality. Just to make an example: these “maps” are “drawn” in many books, of which the most popular and half-visible is Dante’s Divine Comedy: a path that brings the main character from a path of self development, performed through a realization of the various negative and automatic behaviors of  humans, various purifications- to a spiritual path that will bring him towards the final unity with the Whole.
Similar “maps” can be found not only in literature but also in paintings and symbols, such as the Yantras belonging to the Eastern traditions.
I would like to present here an old post published on Facebook in June 2010 which shows a brief and not in-depth example on how a yantra could be used to describe and build a path of inner research through the path that has been taught to me. I hope you’ll enjoy this reading.
With Love, Andrea.

Everyone who has a little bit of feeling for art can’t ignore that Yantras and Mandalas are beautiful paintings, full- colored and harmonized by forms. Beautiful reproductions of such paintings cover the walls of many Yoga schools, ashrams, houses and even work offices. Good decorative pictures which cover an inner and deeper meaning, speaking the language from ancient times and traditions. Jung called such symbols “archetypes”- the original pattern or model of which all things of the same type are representations or copies and have a deep meaning in the human psychic structure. So, let’s “draw” as a “curiosity”, a yantra which may be a representation of self development and a method to achieve a higher state of consciousness.
Just as an experimental purpose….

As explained in many texts of personal development, the personality is the field of the human being acquired through past experiences and  conditionings by education, culture, and family which is acquired during his life. The Essence is the true self, the constant, which exists in a person before any conditioning and it never changes: it is the source of consciousness.  Consciousness is the tool which permits us to perceive reality.  Inner development begins with the observation of the mechanics of our personality, then, through the increasing of our awareness, we can achieve the realization of our true self- we overcome the illusions and enter into the field of Being.
These three symbols could also be used to ”draw” an approach to the method which may be used to achieve some kind of inner development. In fact, each of the three yantras represents a different degree of approach to a system: at the beginning, one begins to understand his situation by observing the attitudes of his personality  as a result of thought and emotions. This is symbolized by the Square. Then, the understanding of the system deepens according to the awareness that he develops step by step, and this is represented by the Circle. Through a further development of his consciousness and self -awareness, he reaches a higher understanding of the system and the dynamics of his mechanicalness and he begins to apply the method of inner development to the deeper part of himself: the Essence; and this is represented by the Triangle. The result of a hypothetical drawing of this sequence assembled together would be something as shown in the figure below. 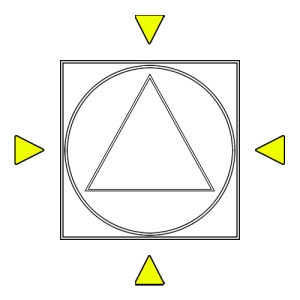 The above figure gives the idea of the possible form it could take once all the elements of the method’s development are assembled:  A Triangle surrounded by a Circle, and framed by an external Square.
A basic Yantra.
So, serious inner work can be understood in different degrees, depending of the level of awareness and understanding achieved through the practitioner’s subjective level of experience. Knowing and awareness can be developed only through practice and self development.

The Square symbolizes the base of a pyramid (Triangle), and the apex of the pyramid is the aim of the work on oneself: the self realization. The four straight lines of the square are the aspects of the system adopted. As an example, I’ll use the methods I practice:

1.    Self observation or presence- (that must be practiced in every moment of the day). This field requires also the theoretical study and research whose aim is to improve the understanding, knowing and realization of what limits keep us imprisoned in what, since the ancient ages until today, is called “the sleep of consciousness”;

2.    Integral Yoga or Yoga of Consciousness;
3.    Practice of the Tai Chi Chuan and Samaveda- ( the second and the third aspects need appropriate moments and places to be done. It leads one to a better understanding of the body and its functions intended by the energy- or call it as you wish- and the physical processes);
4.    Meditation– this is the core of Inner development: this practice requires at the beginning, appropriate moments of calm and gathering and  would lead to the possibility of applying the results of the practice to every field of  life. 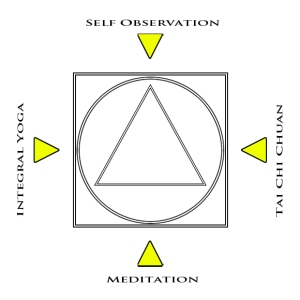 1 Response to Questions, Answers and… the System